It’s hard to believe that Syndicate is over a year old now, and it’s not even the oldest project I’m still working on! Time does go by quickly...

Anyway, I’m excited to announce that a new version of Syndicate, version 1.5, has been released! This update doesn’t add a ton of new features. However, it makes some massive improvements to the user experience.

Of these, perhaps the most important is how I’ve changed the feed loading process. I’ve gotten a lot better at coding since last September when I released Syndicate, but I still hadn’t addressed a major issue with it since version 1.0. This was that the feed loading code ran on the program’s UI thread. This meant that the program would become unresponsive while loading feeds, which was obviously not good. Thankfully, this issue has finally been fixed!

Additionally, I’ve made a lot of improvements to the user interface. Fonts are more consistent, button placements make more sense, and everything looks a bit nicer. I’ve also introduced a progress bar at the bottom of the form that provides some visual feedback during the feed loading process. 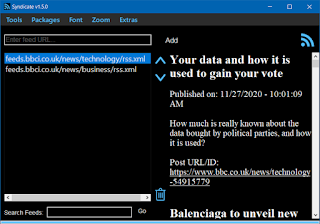 The UI looks and feels quite a bit nicer now.

Finally, I’ve squashed a lot of bugs and made several small improvements behind the scenes. In general, this version is much more stable than the last few, and everything works a bit better now.

Overall, I’m pretty happy with Syndicate version 1.5! Though it may not introduce a ton of exciting new features, it does make several very important improvements to the user experience.

You can download the latest version of Syndicate by visiting the Windows Page. I hope you like it!