Hello, everybody! Please forgive me for the horrible joke, but it does kind of make sense in the case of SpeechLab Wear. I believe I released it at the beginning of October, but it's not really gotten any attention since then. That is, until now!

I am pleased to share that I have finally released an update for SpeechLab Wear. It's not the most exciting update ever, but it does make a few nice improvements.

The main thing this update adds is the introduction of icons for each of the quick phrases. I've also fixed some minor bugs in this release. Again, this isn't a particularly huge update. 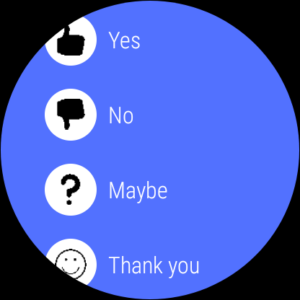 You can get the latest version of SpeechLab Wear from the Play Store. I hope you like it!