- February 23, 2021
Nearly two months ago, I finally got my first Mac: a late 2014 Mac mini. While I usually don't review stuff on this blog, I thought I would make an exception for this device. My hope is that this review will be helpful and fairly unbiased while helping you make a decision on whether or not to get one of these Macs. So, how does this miniature Macintosh hold up today?
Design
The Mac mini's design has remained largely unchanged over the last decade. There have been a few small updates and tweaks to it, but nothing particularly major. This means that the 2014 Mac mini features the usual premium and minimal aluminum casing with a white status LED on the front. Overall, I'd say this Mac mini's design has held up pretty well!
It's very small, being only 8 inches wide and long, while only having a height of 1.4 inches. It weighs a little over 2.5 pounds, so it's not too heavy, either. These dimensions make for a very nice and compact computer, and I think it fits in with my desk setup quite well! 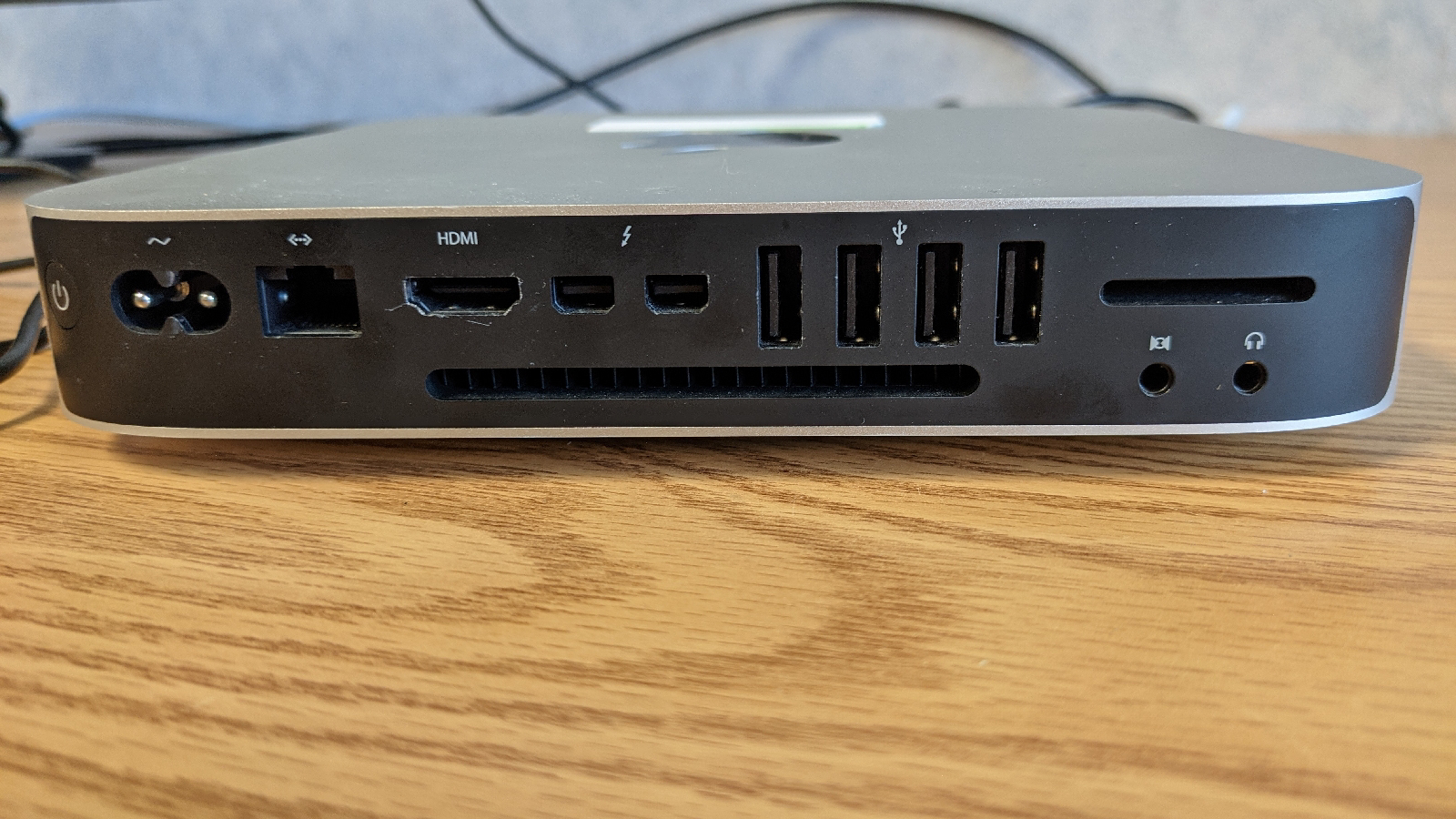 Aside from the gigabit ethernet port, the 2014 Mac mini offers 802.11ac wireless networking (WiFi) and Bluetooth 4.0 connectivity.
Finally, on the front, you'll find an infrared receiver. This allows you to control the Mac mini with a remote, something that could be very handy in a home theater setup. 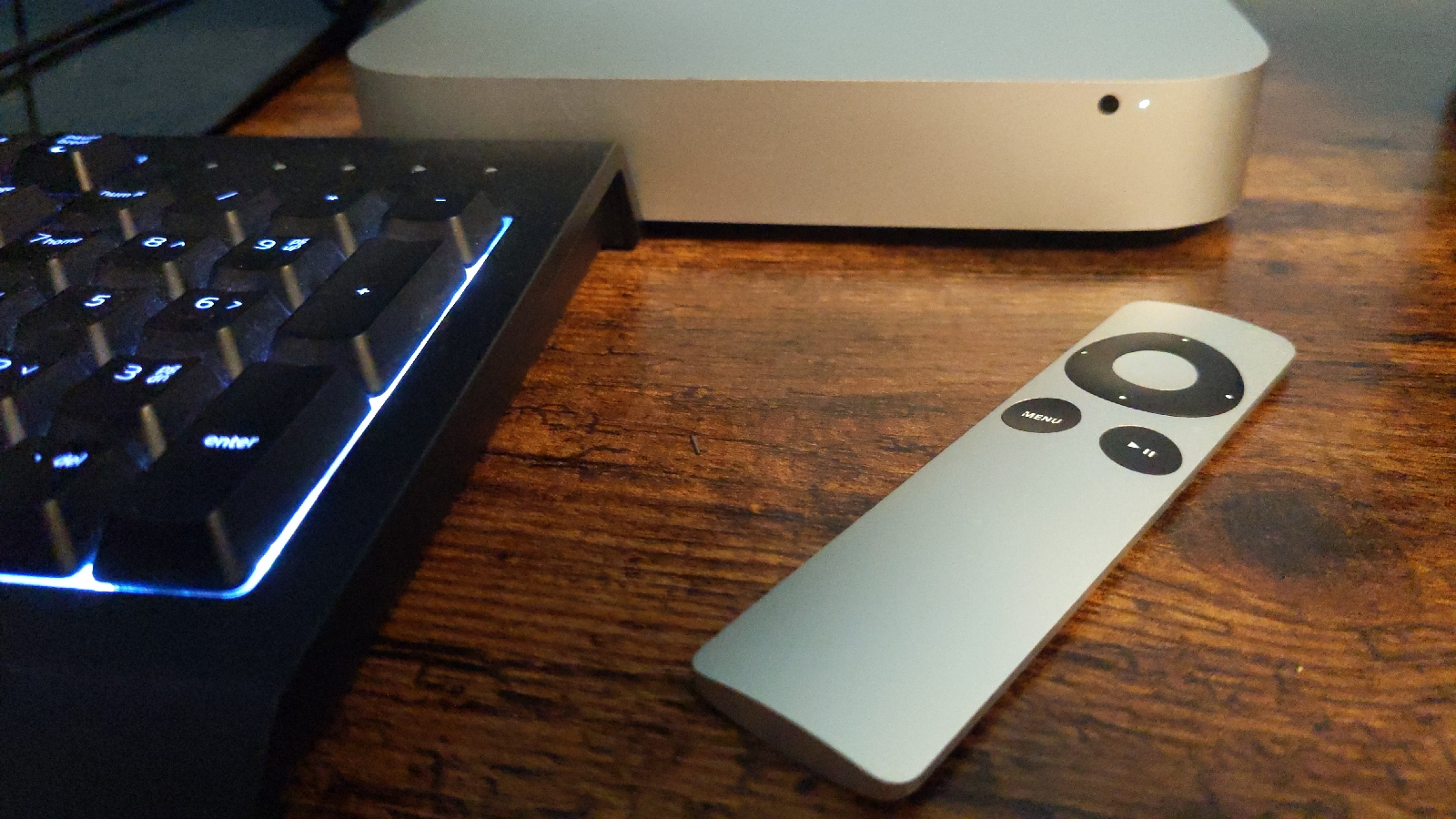 Specifications
Back in the day, this Mac had several different configurations to choose from for processor, RAM, and storage, so I will probably not go too far into the specific specifications of this device in particular. However, there are some things to watch out for if you are interested in getting one of these Macs, too.
First and foremost, be sure to get a model with at least 8 gigabytes of RAM. The memory is soldered to the motherboard, so you won't be able to upgrade it in the future. 8 gigabytes should be enough for most basic tasks and even some more demanding ones.
Second, avoid the base 1.4 GHz i5 (4th generation) model with Intel HD Graphics 5000. While I can't say for sure, I've heard that performance is pretty unbearable with that processor. You'll definitely want to at least opt for the 2.6 GHz i5 configuration, as I did.
Finally, be prepared to replace the hard drive with an SSD on models that use the stock 5400 RPM hard drive as the boot drive. These hard drives are incredibly slow, and 2.5-inch SSDs are inexpensive enough that I would consider them to be an essential upgrade. Just be careful when doing this upgrade, as these Macs are a bit hard to work on if you aren't experienced with that sort of thing. Performance
Prior to its SSD upgrade, I found my Mac to be quite sluggish. However, after swapping the clunky old 5400 RPM hard drive with a Crucial BX500 2.5 inch SATA 3 solid-state drive, I saw a night and day improvement in performance. Boot time was dramatically reduced, and everything felt much snappier. I'd say that the SSD upgrade was certainly worth it!
Anyway, my 2.6 GHz i5 model with 8 gigabytes of RAM and Intel Iris Graphics 5100 had no problem running macOS Big Sur after this upgrade. I wasn't easy on it, either. At one point, I was working on an iOS app in Xcode, running the iOS emulator, had 3 tabs open in VS Code, Discord was running in the background, and I had 20 tabs open in Chrome. However, with all of this stress, the Mac mini still performed just fine thanks to Apple's impressive optimization. Overall, I also found that this Mac remained quiet and cool most of the time, except on one occasion when I was exporting a 7-minute video in iMovie at high-quality settings with Discord running and several Chrome tabs open. Even then, the performance was still more or less fine. In the case of my configuration, you'll notice the limitations of the hardware from time to time, but it should be more than powerful enough for most simpler tasks and even some more intense ones. 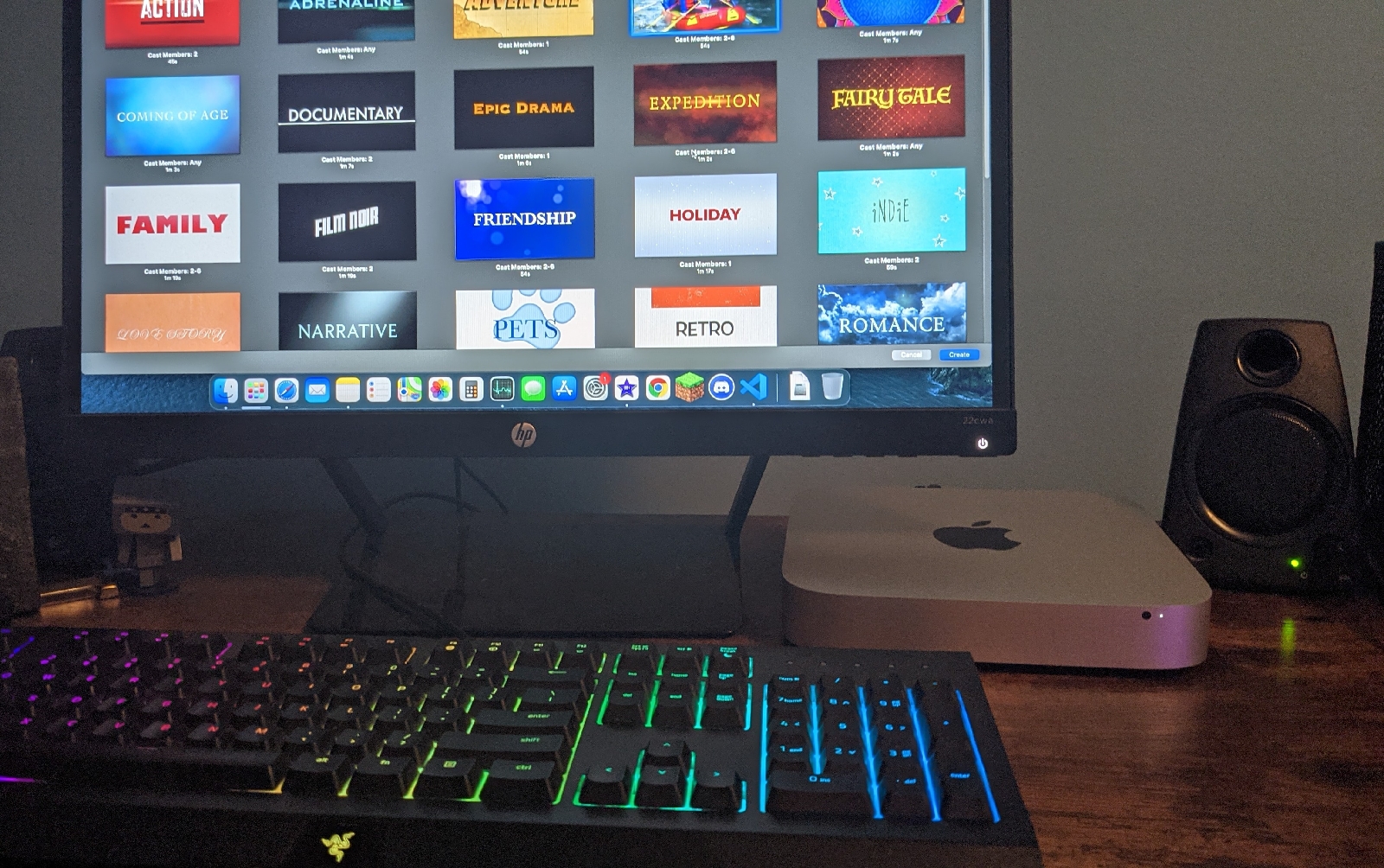 Worth buying?
If you want a modern Mac mini, should you go with the late 2014 model? It depends.
On one hand, with late 2014 models configured like mine usually going for around $300-$400 on eBay in the US, it may be also worth looking into the current M1 Mac mini. It's usually priced at $700, but it was recently on sale for $600 at some places. However, it is still a few hundred dollars more expensive, and there are always risks to trying out first-generation hardware like the M1.
Alternatively, the older 2012 model may also be worth looking into. In a confusing but very Apple-like move, the 2014 model lost quad-core processor configuration options and only offered dual-core ones. Furthermore, the 2014 model removed user-upgradable RAM, something that the 2012 model offered. However, the 2012 Mac mini is no longer supported, and the latest macOS version it can officially run is 10.15 Catalina. While you can definitely use a Big Sur patcher to unofficially run the latest version of macOS on a 2012 model, this isn't the most elegant solution.
Why buy the late 2014 Mac mini? It's cheaper than the 2020 M1 mini, but it is also still a fairly modern and supported machine. The 2014 Mac mini was the latest model up until 2018 and was sold until its successor was released that year. This means that it is not only still supported at the time I'm writing this, but it may continue to be for a little while longer. It's hard to say for sure, but it is something to consider.
If you can find a good deal on one, I'd definitely recommend the late 2014 Mac mini! While it is worthwhile to consider the alternatives, it's still a really nice little computer with all the benefits that come with officially supporting the latest version of macOS. 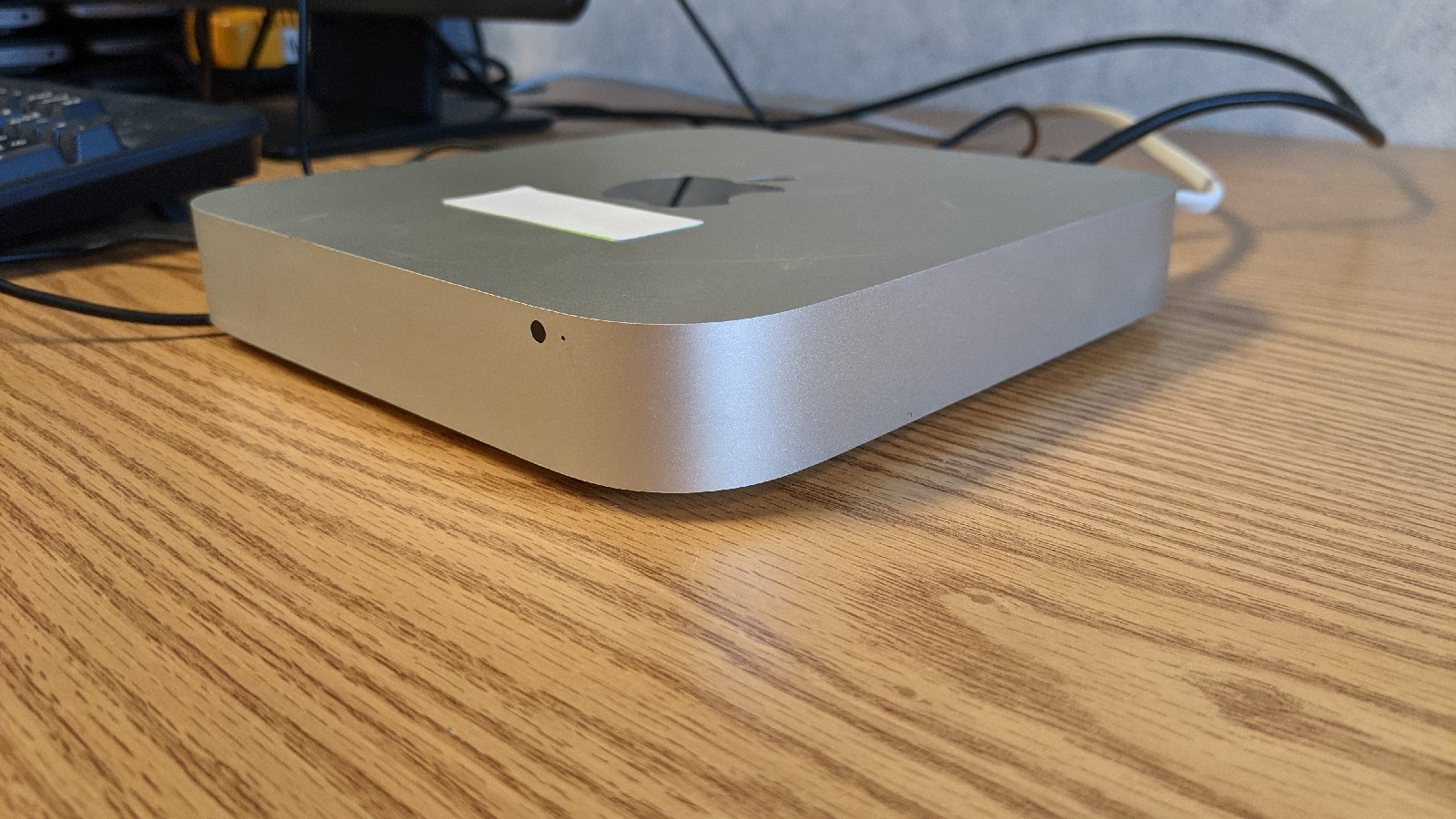 Special thanks to my school's tech department for letting me use some photos of their late 2014 Mac mini while I was away from home!
Update: It has been confirmed by Apple that the late 2014 Mac mini will officially support macOS 12! This is very exciting news, as it means this older Mac will be able to live on for a while longer.
Random Review Tech