The goal of this post is to share my experience modding this retro audio player and help you decide if you should attempt this project, too. While this isn't the sort of thing I usually write about on this blog, my hope is that this post will be helpful to those interested in building a custom iPod. So, without further ado, let's begin!

With the rise of DankPods, modding iPods has quickly become quite popular among retro tech enthusiasts. As someone who had been using iPods for several years prior to their resurgence in popularity, I was intrigued by the idea of making my own custom iPod. This was especially true since I had a broken iPod Video that I could easily mod. Then, something completely unexpected happened: the pandemic. I quickly realized that this would be a great project to work on during the lockdown. As a result, within days of everything shutting down, I had ordered all my replacement parts and prepared to embark on my custom iPod journey. Little did I know, this adventure was not going to be as quick and easy as I had anticipated. 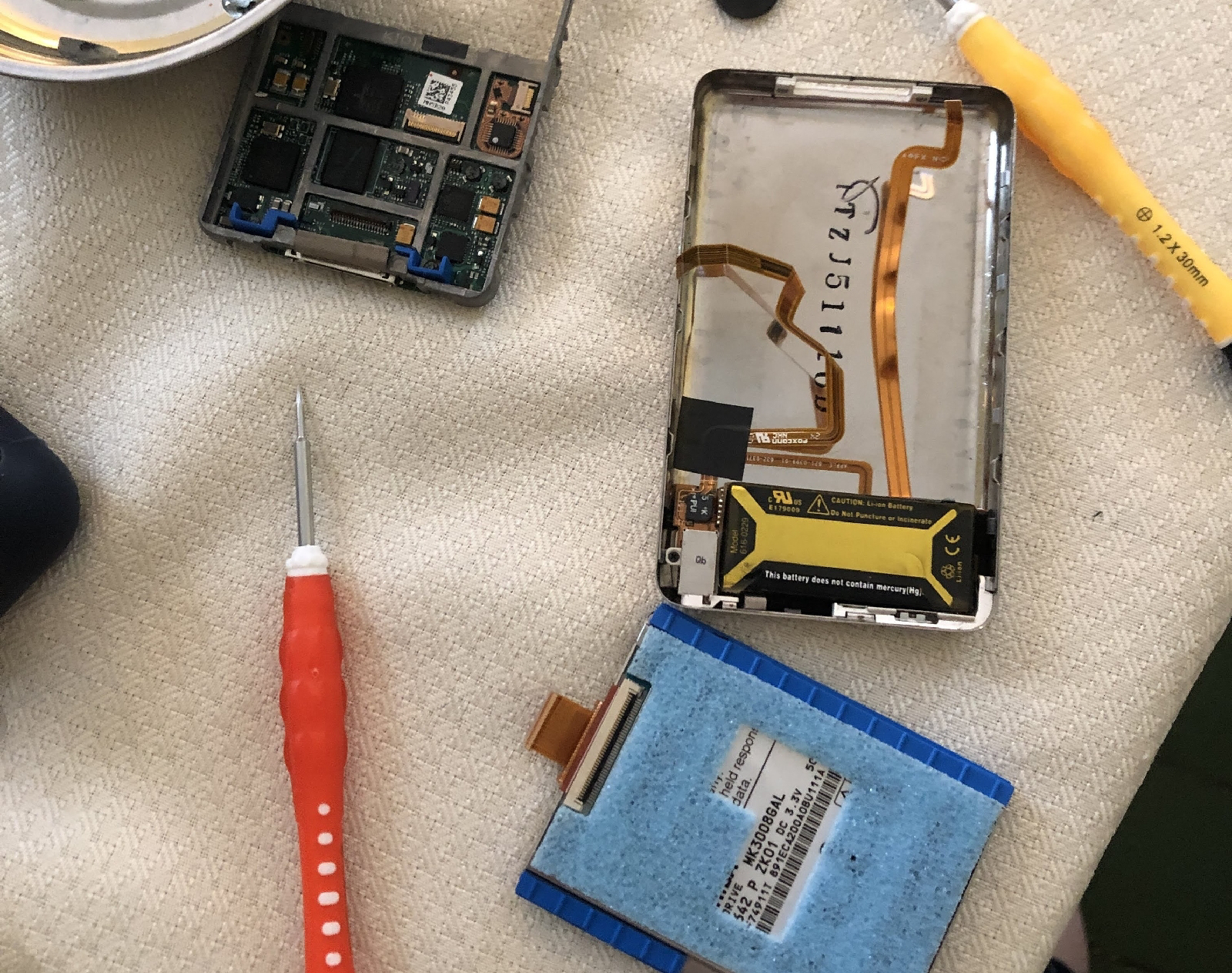 A little over a week after I had ordered everything, the replacement parts came in the mail. This 5th generation iPod (Video) unfortunately had a dead motherboard, weak battery, and damaged screen. From what I remember, the combined cost for all of these replacements parts was perhaps a bit over $60 (USD). I wanted to make sure I could fix the iPod before I invested in the custom parts, so I decided to get to work immediately. 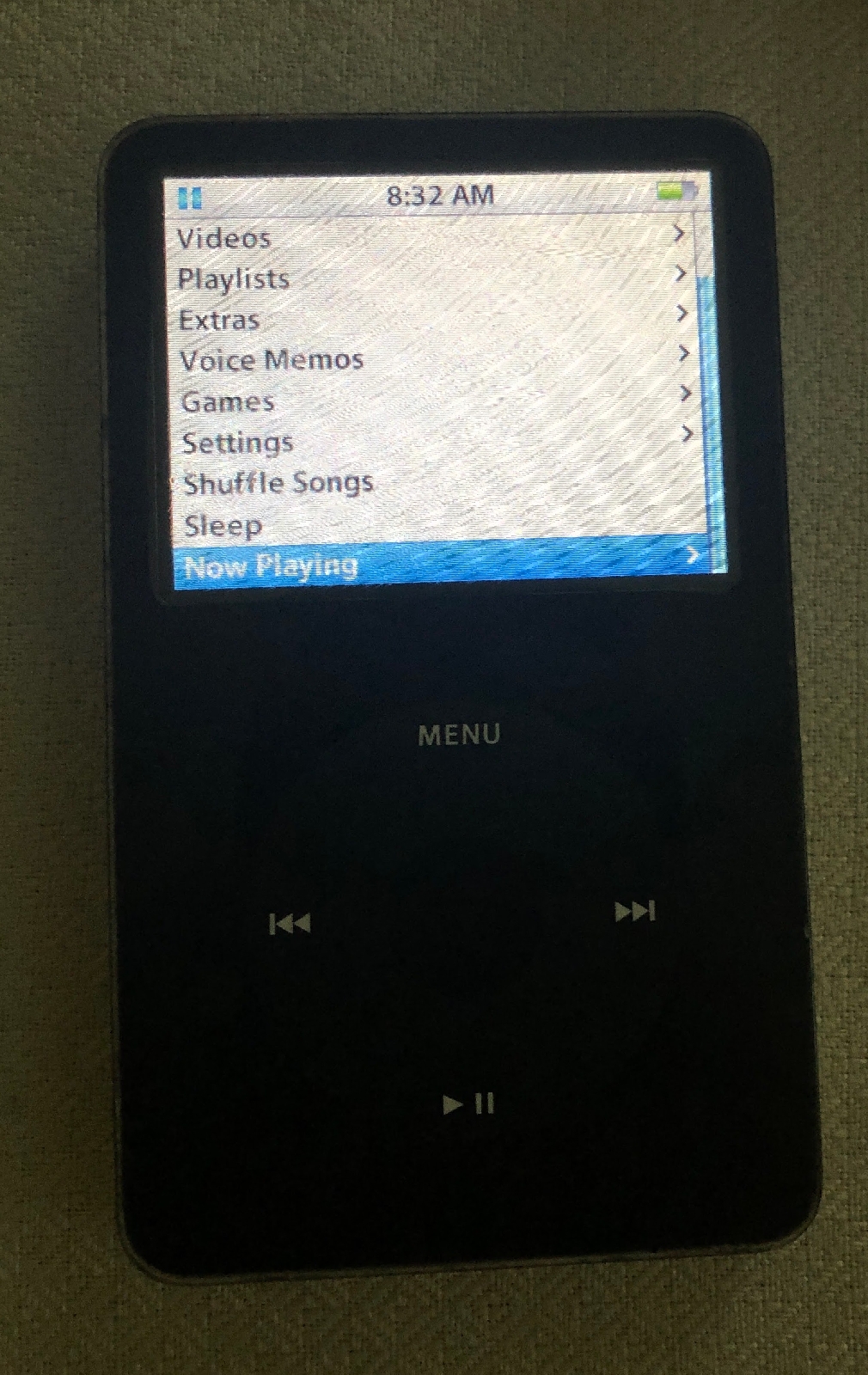 I nervously swapped out the screen, motherboard, and battery, fearing I would break something in the process. However, luck was in my favor, and I ultimately succeeded in repairing it! I turned it on and enjoyed my restored iPod. With that out of the way, it was time to order the custom parts. 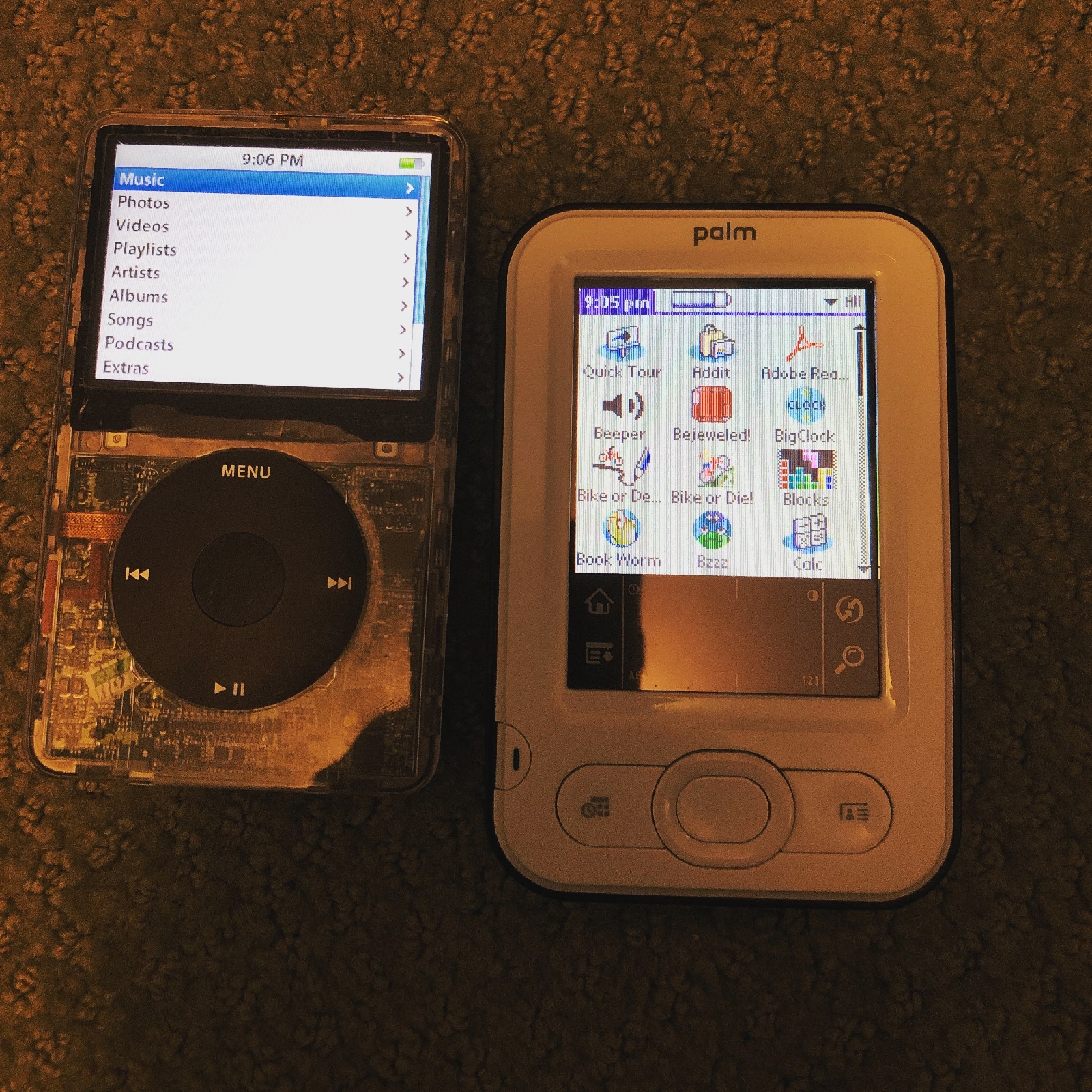 I was soon able to get the custom parts. These included an iFlash Solo adapter, which allowed me to use an SD card instead of the stock 1.8 inch hard drive, and a transparent front plate. Like the original repair, modding it was more or less uneventful! For a while, it seemed like this project was finally complete. A couple of months passed by since I initially repaired it, and I wasn’t encountering any major issues. However, this would soon change. 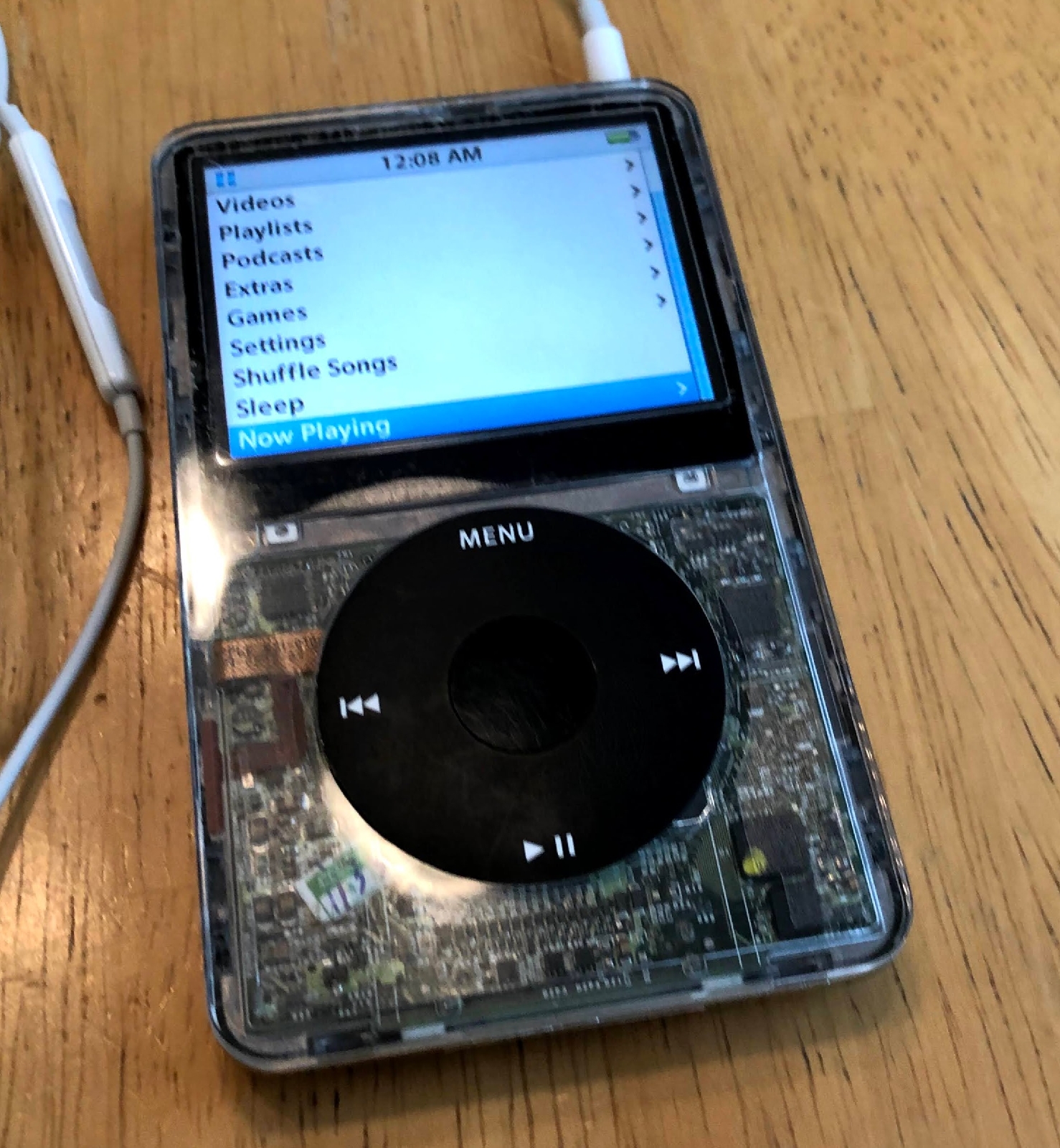 A couple of months after successfully modding my iPod, I started to notice an unfortunate issue. I found that audio sounded unbalanced, and I discovered that it would cut in and out if I pressed on the front of the iPod. I decided to open it up and find out more about the issue. Eventually, I came to the realization that audio would stop working depending on the position of the headphone jack cable. I was going to need to replace it.

I had already spent a lot of money on this project at this point, so I really wanted to see if I could come up with some sort of solution without having to buy a new cable. At first, this worked decently. I found that taping the cable in a certain position temporarily fixed the issue. For a while, I used the iPod as is and just took it apart and moved the cable around when I experienced issues. However, this was not an ideal solution, so I finally gave in and bought a new cable. However, this was just the beginning. 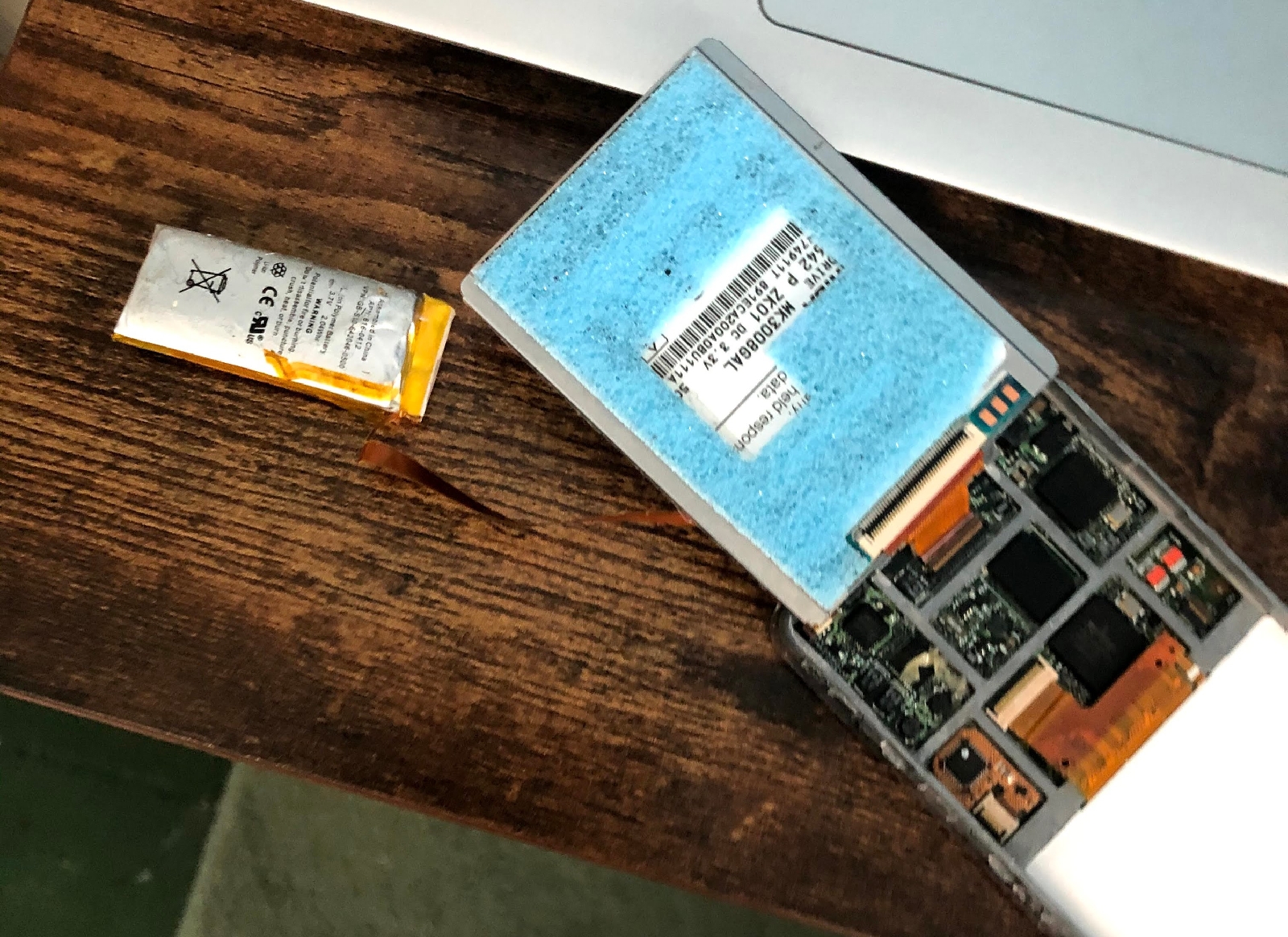 If It Can Go Wrong, It Will Go Wrong

The next several months mainly consisted of new problems coming up, me disassembling the iPod, then taking breaks from the project for a few weeks, and finally giving in and ordering more replacement parts. I could spend a lot of time writing about all of the issues I encountered, but in the interest of preventing this post from becoming ridiculously long, here’s the summary.

I ended up getting a new headphone cable, but I quickly learned that it was even more messed up than the original one. Thankfully, I was able to get a free replacement from the seller. About a week later, I received the replacement and successfully fixed the audio issues on my iPod! However, a few months after this happened, a new issue came up. The hard drive ribbon cable connecting the iFlash Solo to the logic board stopped working, and I needed to replace it, too. However, I apparently opened it one time too many, since the replacement battery’s ribbon cable broke as well.

Reluctantly, I got a replacement hard drive cable. Thankfully, this one actually worked. Eventually, I was also able to get a replacement battery as well. After sealing it up for the final time, I let out a sigh of relief. Almost one whole year later, this project was finally complete. 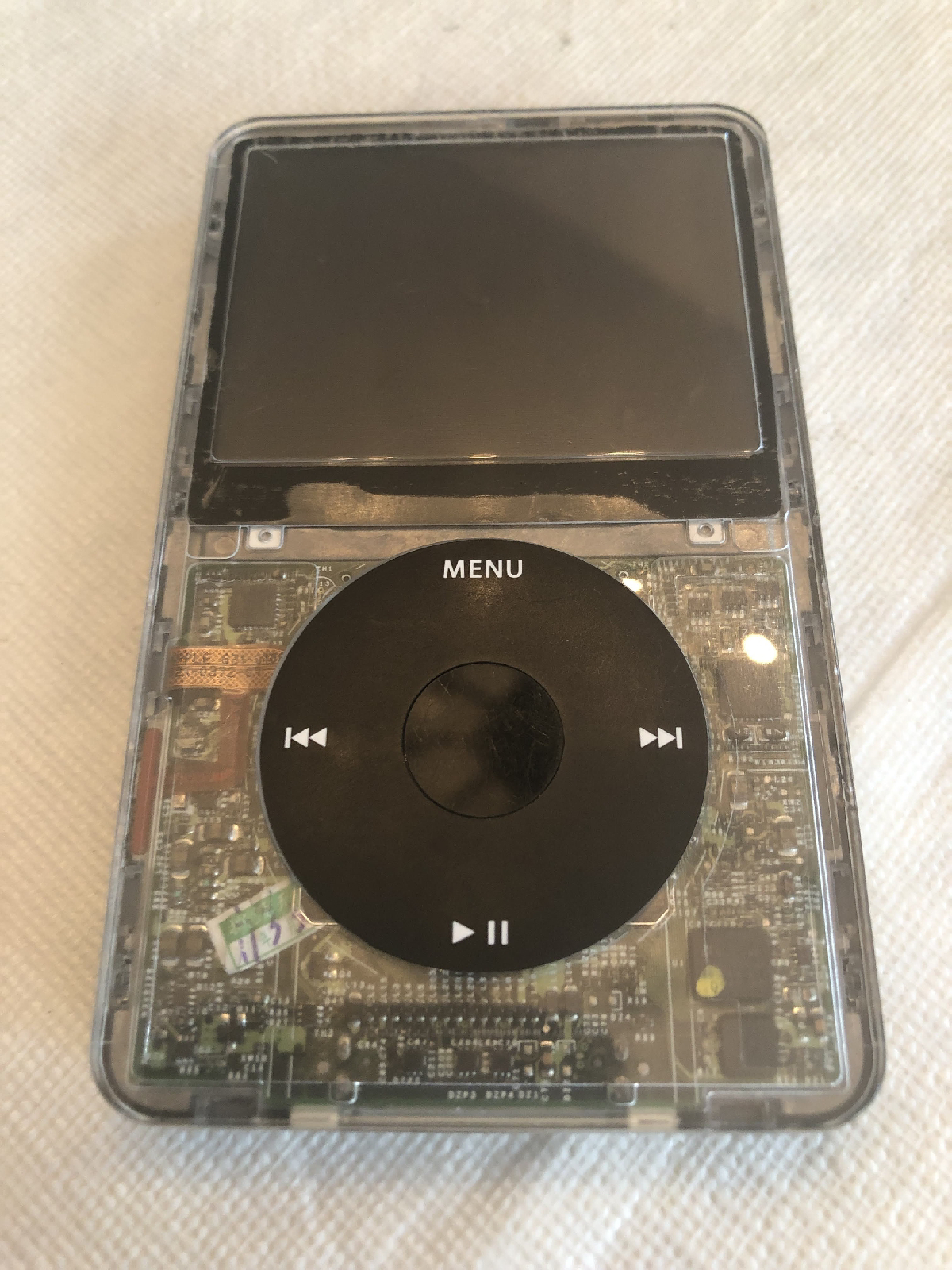 At this point, you might think that I would hate this iPod with a passion and now be a diehard Zune fan. However, this simply isn't the case. In fact, if anything, this long journey led me to appreciate this iPod even more! While I spent many hours working on it and probably over $150 on the whole project, it proved to be an amazing learning experience, as this was really my first experience with repairing and upgrading retro portable audio players. For this reason, don’t let this story discourage you from making your own custom iPod. I imagine that most people have had better luck than I had, anyway. It’s just important to remember that old electronics are easily prone to failure. 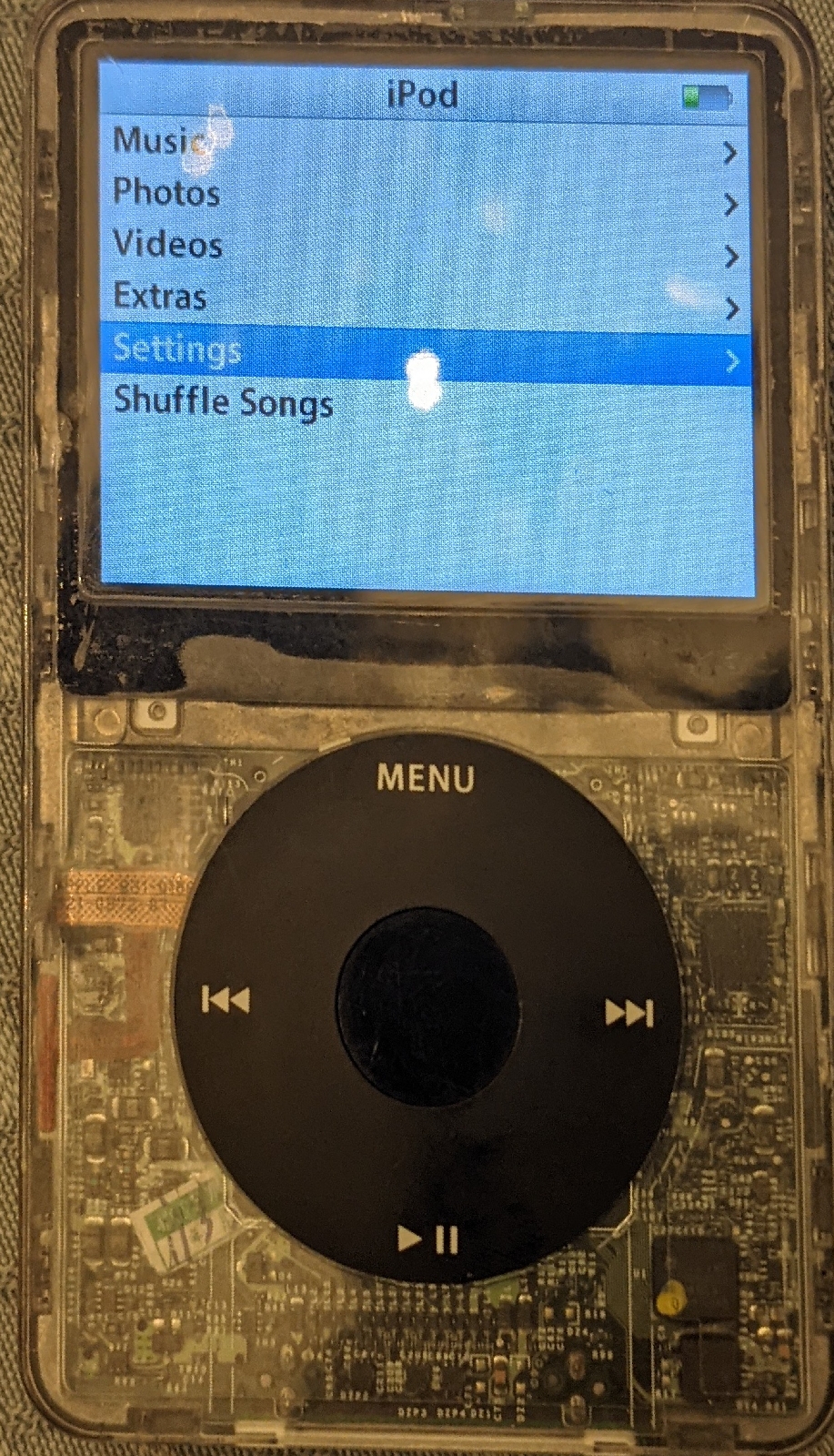 After using my completed iPod for a couple of months, I can safely say that it is one of the coolest devices I own and I am very glad that I was able to make it. Now that my iPod is no longer sitting somewhere in several pieces, as was often the case prior to the project’s completion, I’ve been able to take it around and enjoy it fully. Music playback is great, it works just fine with the latest version of iTunes, and the custom transparent face plate certainly gets people’s attention. Overall, it’s a really neat and unique device! So, with all of this in mind, I think it’s time answer the overarching question of this post: should you make a custom iPod too?

If you are interested in making a custom iPod, enjoy working on computers, and are willing to invest some time and money into a project like this, then I think that you absolutely should try to build your own custom iPod! Just make sure you know what you’re getting into before you spend the money on it. Remember that old devices with several points of failure like iPods might, well, fail. If you are willing to spend the money, take the risk, and like the idea of using a slightly unconventional device for your music playback needs, modding an iPod is certainly a great project to take on!