PowerBook 520 and the Dawn of Laptop Computing

- October 31, 2021
Hi, everyone. As you may know, laptops really started to gain popularity in the early 90s, and at the forefront of this new clamshell computer craze was none other than Apple. Indeed, their innovative line of PowerBook laptops pioneered many of the things we take for granted on laptop computers today. So, when I brought home a free PowerBook 520, I was thrilled to try it out. Here’s my experience with this classic notebook over the last few days!
Hardware

To begin, I want to make it clear that this is a very chunky laptop. It's incredibly heavy, and it’s obviously not as portable as we’re used to these days. Regardless, some things do feel very familiar, like the built-in stereo speakers and trackpad technology these 500 series laptops first introduced. However, some features of this laptop are long gone now, such as its dual battery bays, array of ancient ports hidden behind a folding panel, and 3.5 inch floppy drive. It definitely looks its age, but there’s no denying that this PowerBook has aged well in some regards. 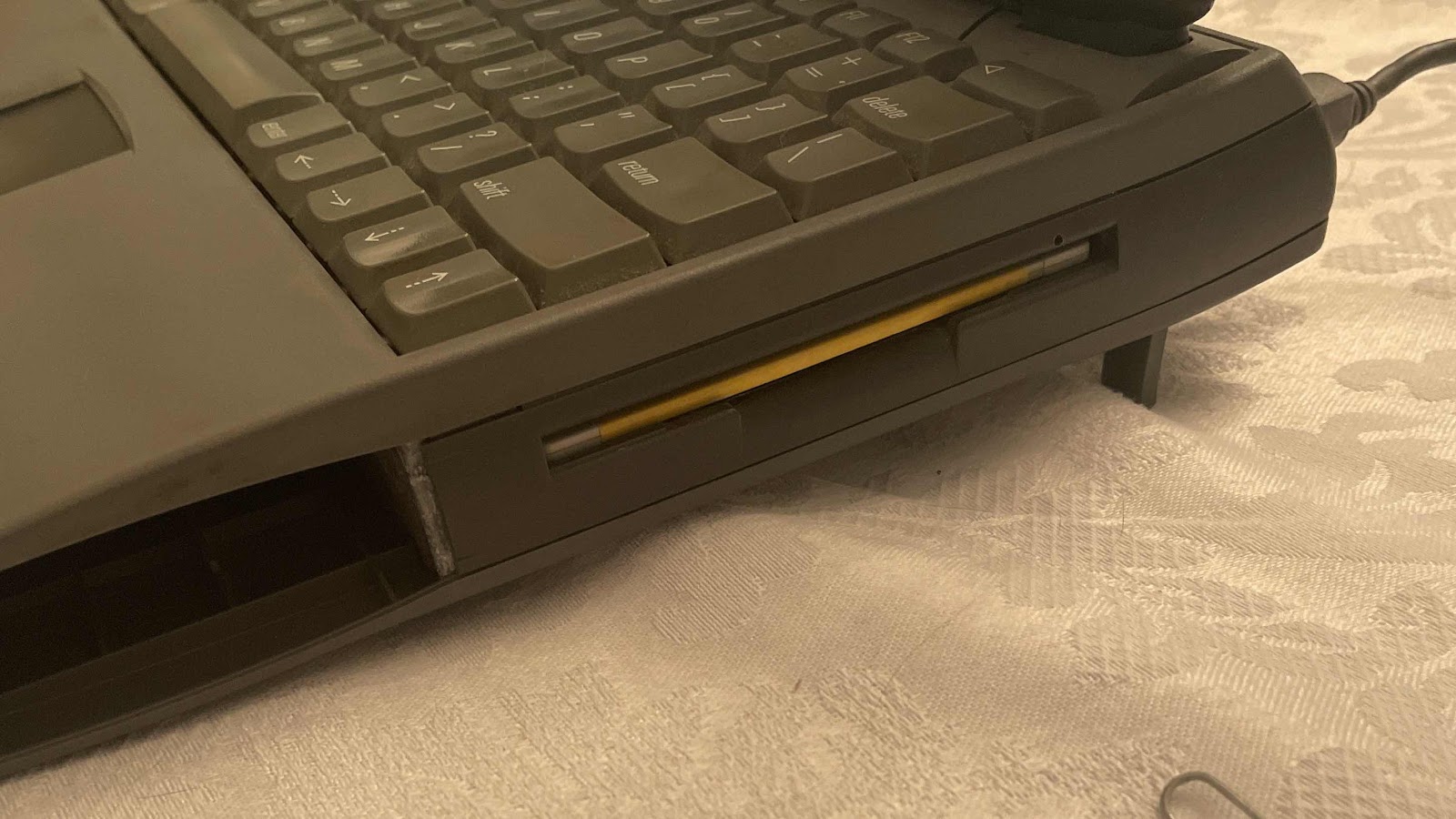 Moving on, you will find a rather mediocre keyboard above the aforementioned trackpad. Unfolded, you’ll also see this laptop’s rather small grayscale passive matrix display. It’s surrounded by those stereo speakers I previously mentioned and a single microphone. This results in comically large bezels, but I think that look suits this laptop pretty well. 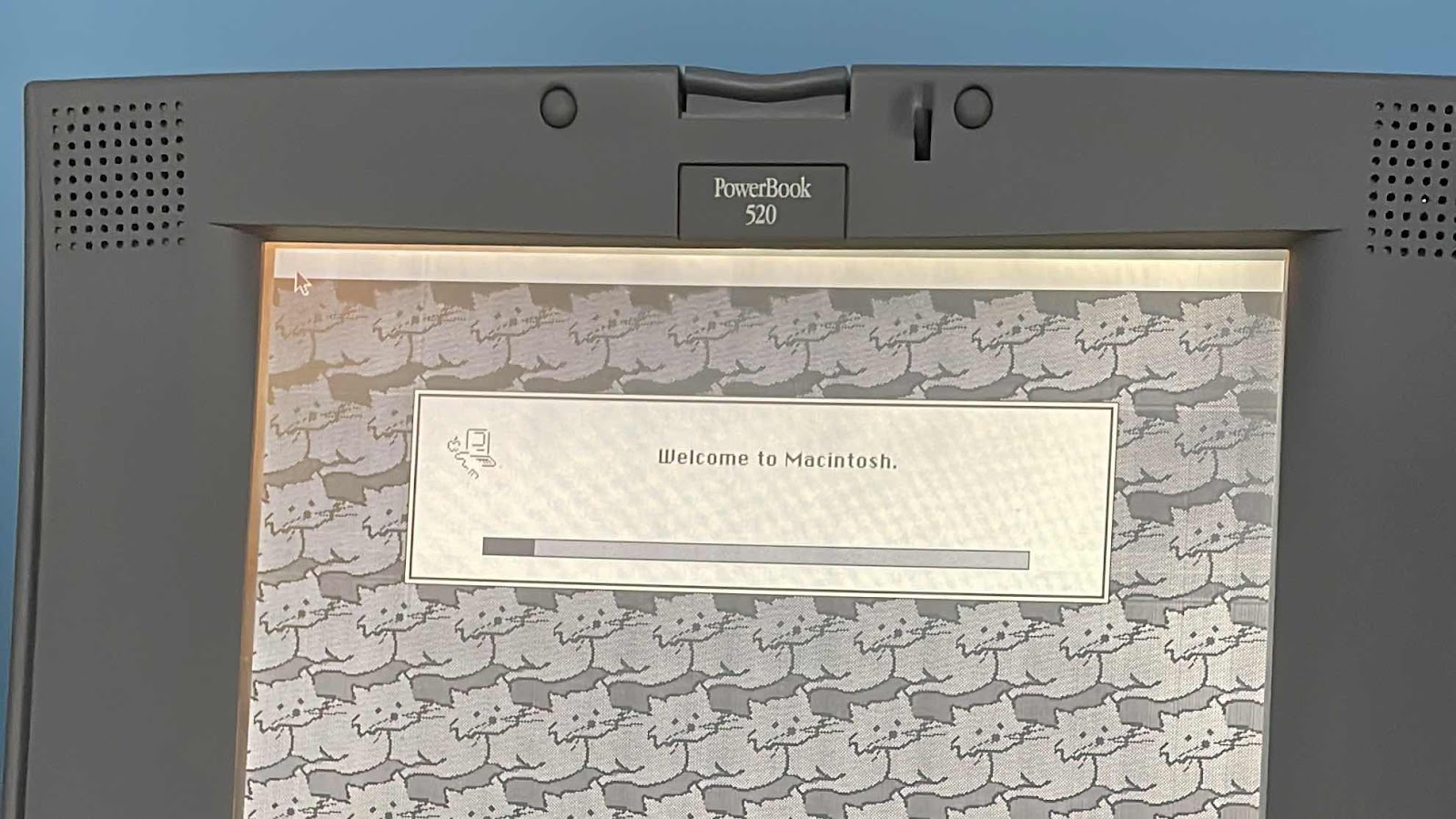 As for the technical specifications of this Mac, you’ll find a 25 MHz Motorola 68K processor, 4 megabytes of RAM, and a ~256 megabyte hard drive. These specs may seem archaic by today’s standards, but they were respectable for a laptop when this one was released.

To conclude, this laptop’s hardware is very much from another era, as you would expect. This is both good and bad, as while it’s dated design is certainly very interesting, it also means that it is more prone to failure or simply falling apart. That being said, this was a free laptop, so I can’t complain! In my opinion, it’s a fascinating little machine, and its software undoubtedly contributes to that sentiment.
Software 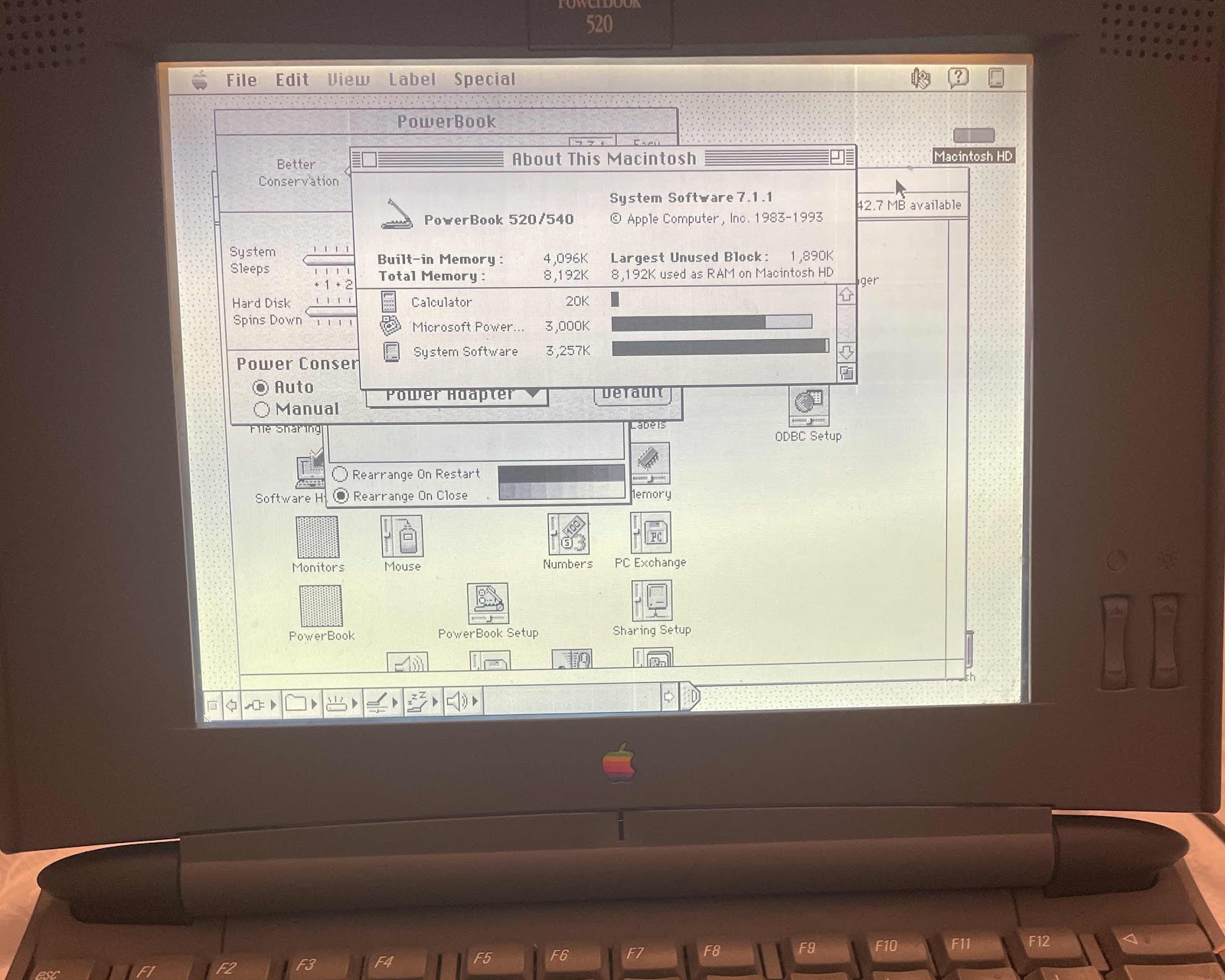 While hardware elements such as the classic trackpad and unique design definitely make this machine appealing to tech enthusiasts, the software is also a big draw here. That software, at least on my machine, is the classic Mac OS 7.5. When I got it, I upgraded to this version from System 7.1, which it seemingly originally shipped with. As someone who hadn’t ever experienced classic Mac OS until I got this laptop, I can say that I am very impressed. It does have some quirks, but it’s surprisingly advanced given the time it was released, especially considering some of the programs made for it.

Not only did a lot of classic applications and games come with this machine, but I also found that I could save and read files from some of my floppies that were formatted for DOS. This meant that I could transfer files to and from the PowerBook to my modern Mac and PCs, although I wasn’t able to figure out how to install new programs on it. 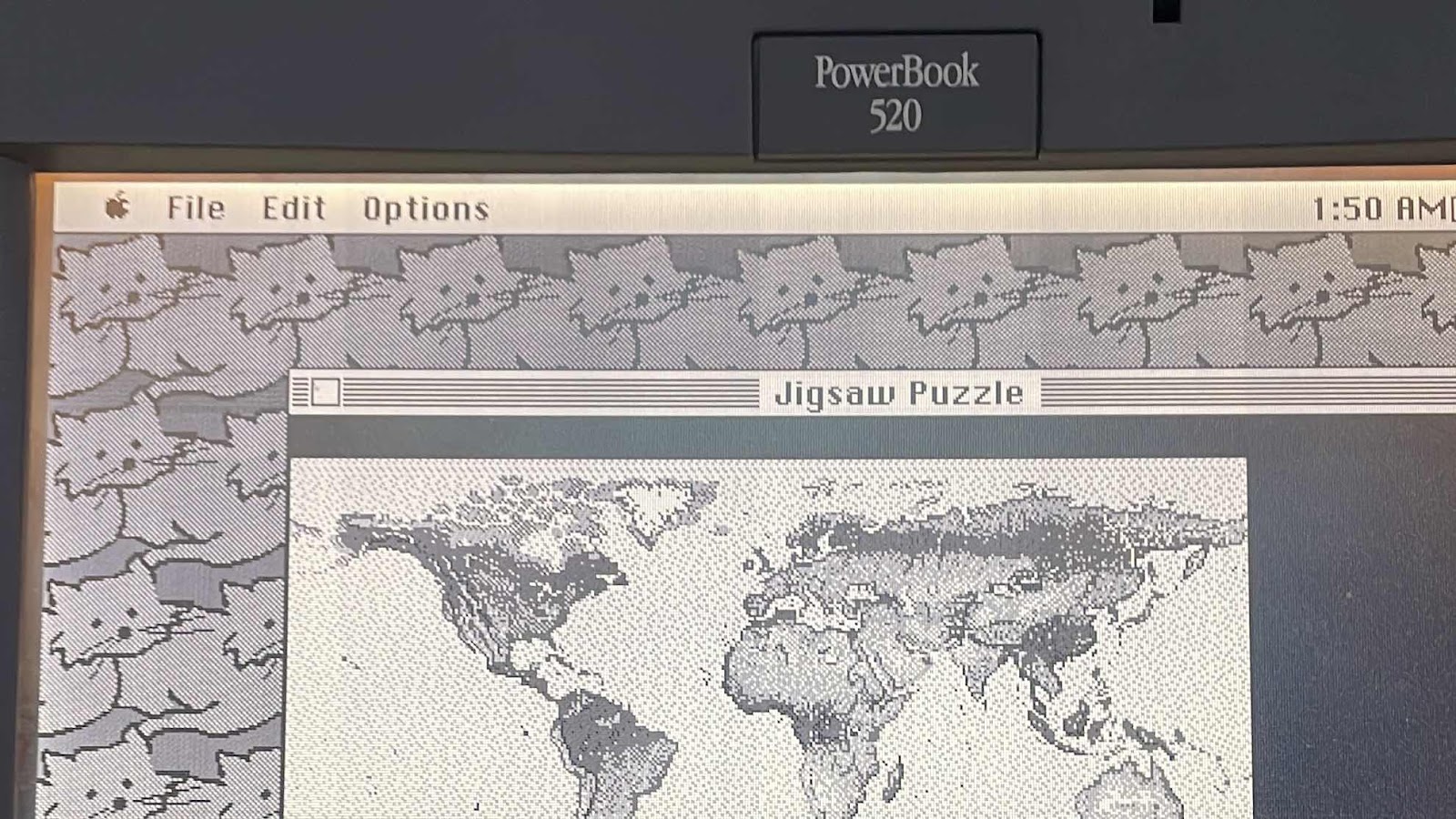 Regardless, there was still a lot to explore! The previous owner had installed Microsoft Office, ClarisWorks, several graphing programs, and even the classic Oregon Trail. While I still hope to expand the library of applications on this device in the future, I think I got pretty lucky with the installed programs on this laptop. 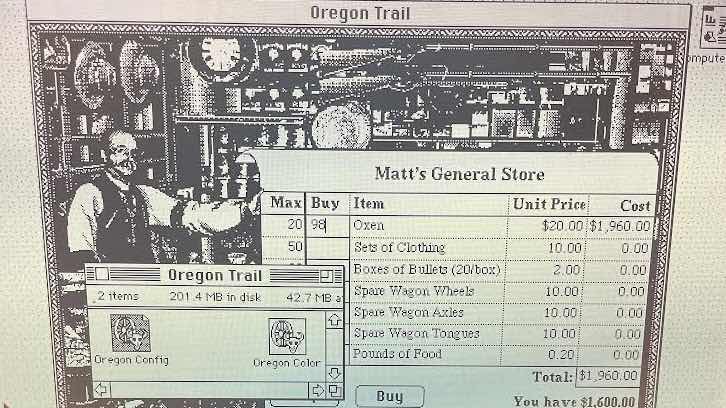 Last but not least, there’s Mac OS 7 itself to discuss further. Believe or not, despite the fact that it is fundamentally different than the “macOS” we know and mostly enjoy today, it still has a lot of UI similarities. The menu at the top of the screen displays application options and various different pieces of information, just like macOS 12. Furthermore, there is a dock at the bottom of the screen with several handy shortcuts, yet another Mac feature that has stuck around. To be clear, I’m not saying that this decades-old operating system is super similar to what we have today, as it is most certainly not. However, it does definitely have that Mac feel to it.
Final Thoughts 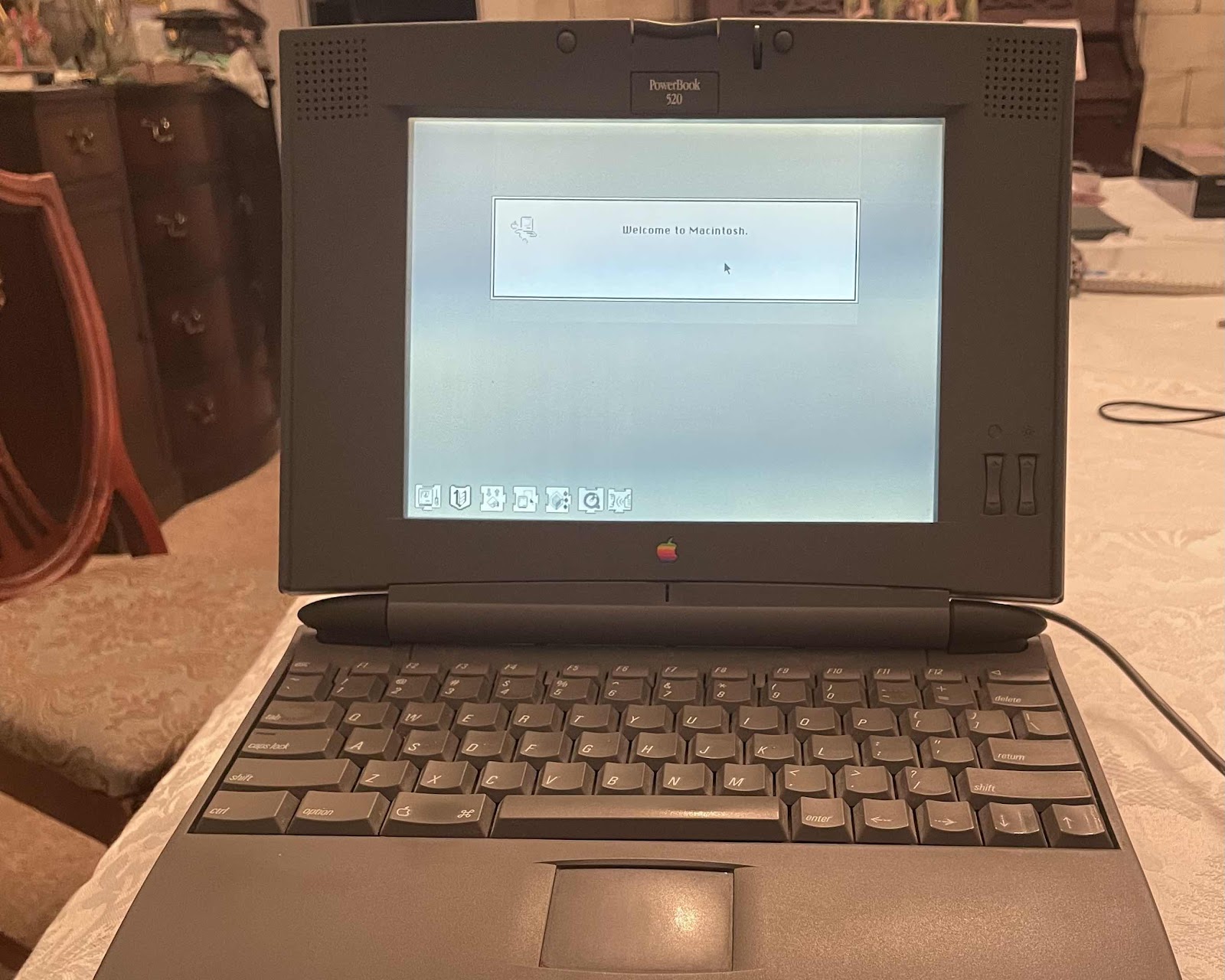 In many ways, this PowerBook is a time capsule of the early days of laptop computing. These were the times when color screens were a premium feature, RAM was measured in megabytes, and Mac OS was only about a decade old. While I’m glad that we have moved on from this era in computing, I also have an appreciation for its hardware and software. For simple tasks like writing or playing some less demanding retro games, this PowerBook still works pretty well, and it’s a lot fun to mess around with! Therefore, despite its flaws and tendency to frequently develop new issues, I am very fond of this laptop. As an Apple fan, I enjoy having it in my collection, and as someone who finds old gadgets fascinating, it’s an enticing mix of vintage technology, the retro Macintosh experience, and pure aesthetic that’s hard not to love. 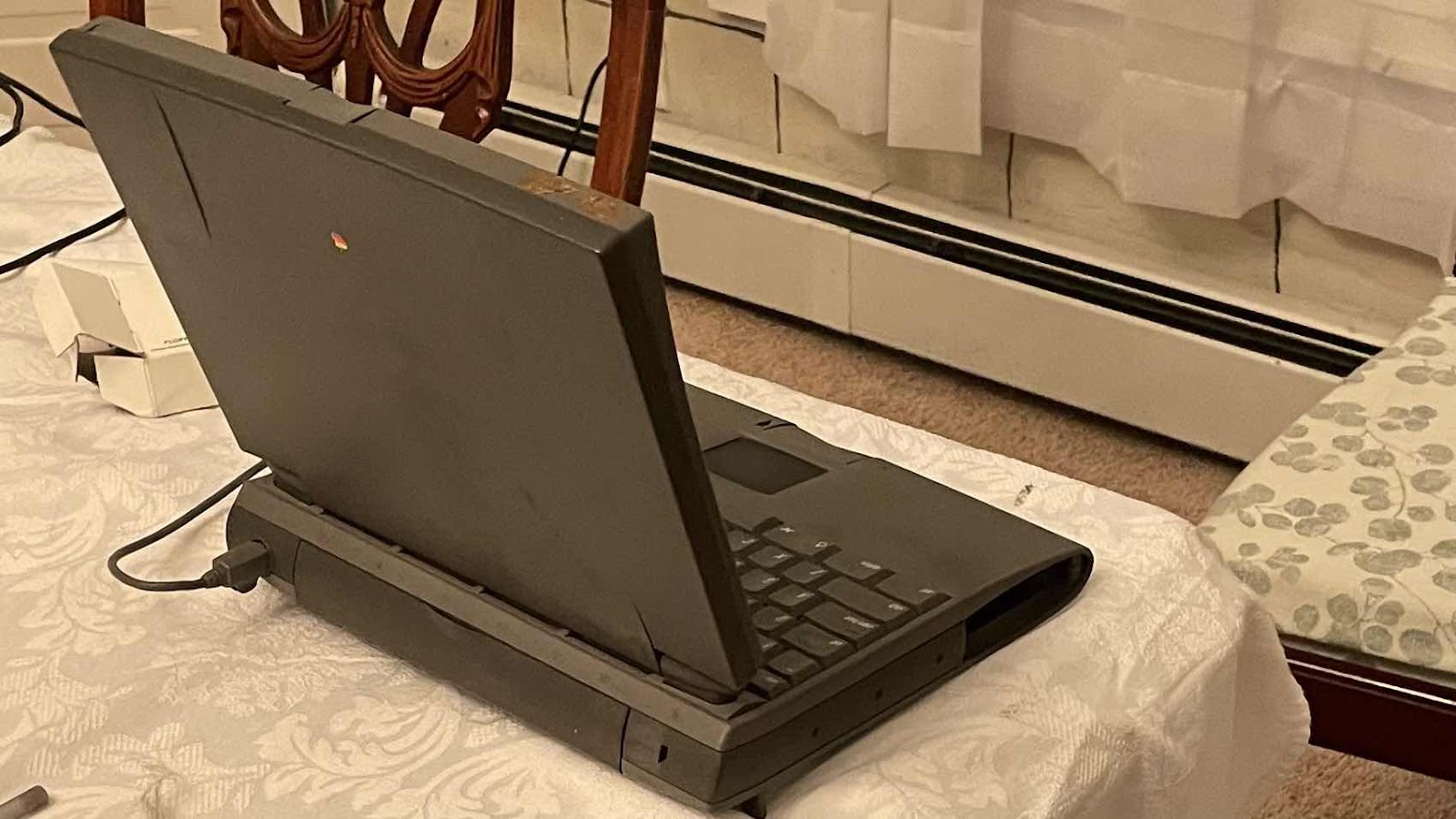